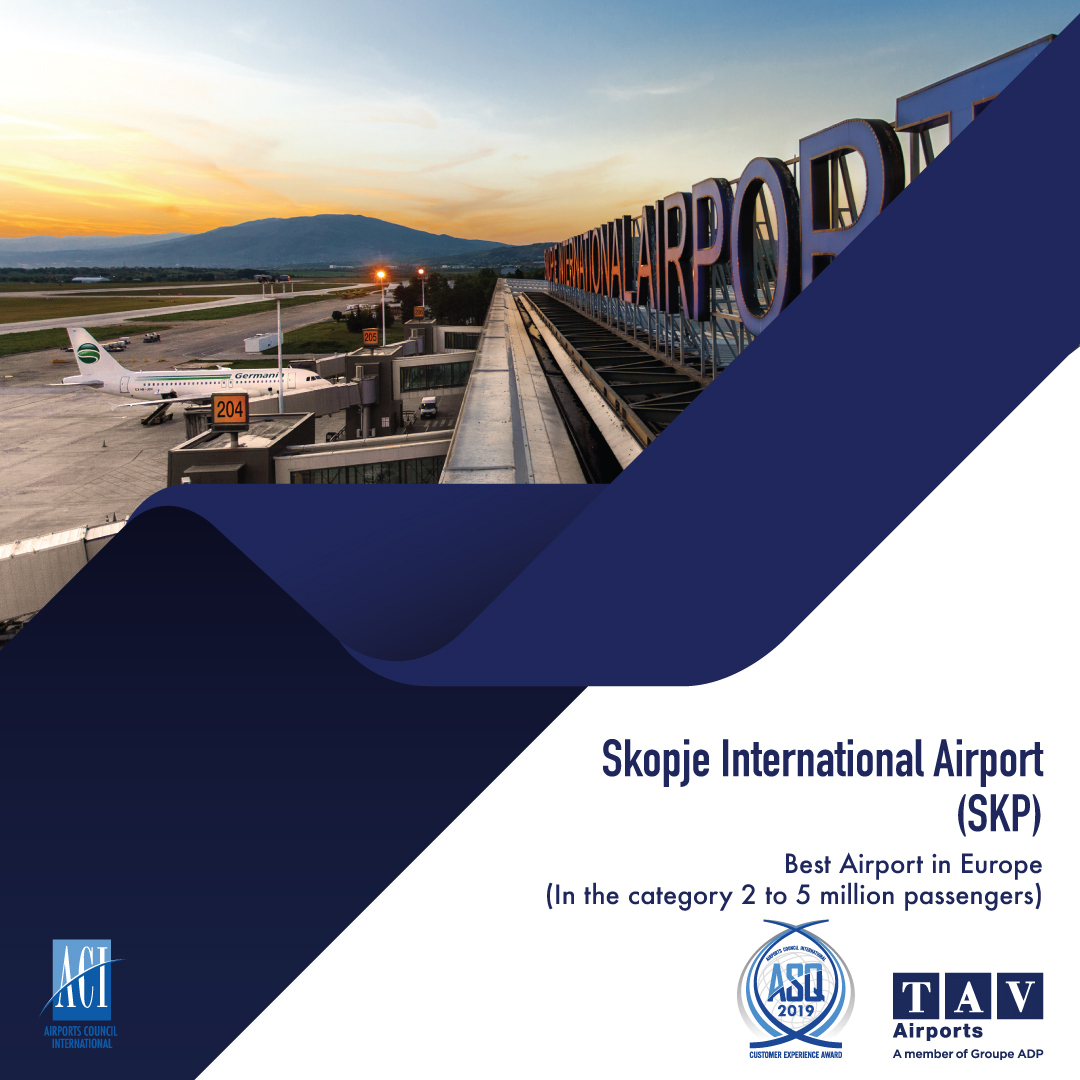 Airports Council International (ACI), the world renowned organization, awarded Skopje International Airport with the ASQ Award for 2019, listing it as one of the Europe’s top airports in customer experience, in the category of airports from 2 to 5 million passengers annually.

This is the 5th time Skopje International Airport receives the Airport Service Quality Award by ACI. The previous ASQ awards were received for 2012, 2013, 2015 and 2018.

ACI revealed the winners of its world renowned Airport Service Quality Program Awards today, 9th of March 2020, in its headquarters in Montreal, Canada. ACI’s ASQ Program recognizes the airports around the world that deliver the best customer experience in the opinion of their own passengers.

-It is the 5th time we are receiving such great news from ACI, that Skopje International Airport is the winner of the prestigious Airport Service Quality (AQ) Award for 2019. We are delighted and proud to share this information to the Macedonian public, because the ASQ award is a global benchmark for airport excellence. By exceeding 2 million passengers in a single year in 2018, as of 2019 Skopje Airport started to compete in a different category, according to size - from 2 to 5 million passengers. It automatically brought a stronger competition, but despite that we won the award which proves our high customer satisfaction level. I would like to thank to all our employees for their efforts, to our sister companies BTA (Food & Beverages), ATU (Duty Free Shop), TAV MOS (PrimeClass & Commercial services), TAV Technologies (IT services), and Euroclean (Cleaning services), as well as to the Police and Customs, as state authorities present at the airport with their services, stated Alper Ersoy, TAV Macedonia General Manager.

The Airport Service Quality (ASQ) program is the world’s leading airport passenger service and benchmarking program, measuring passengers’ satisfaction across 37 key performance indicators. It is conducted by certified ASQ field agents who interview passengers whilst at the airport, through ACI’s ASQ Questionnaires. 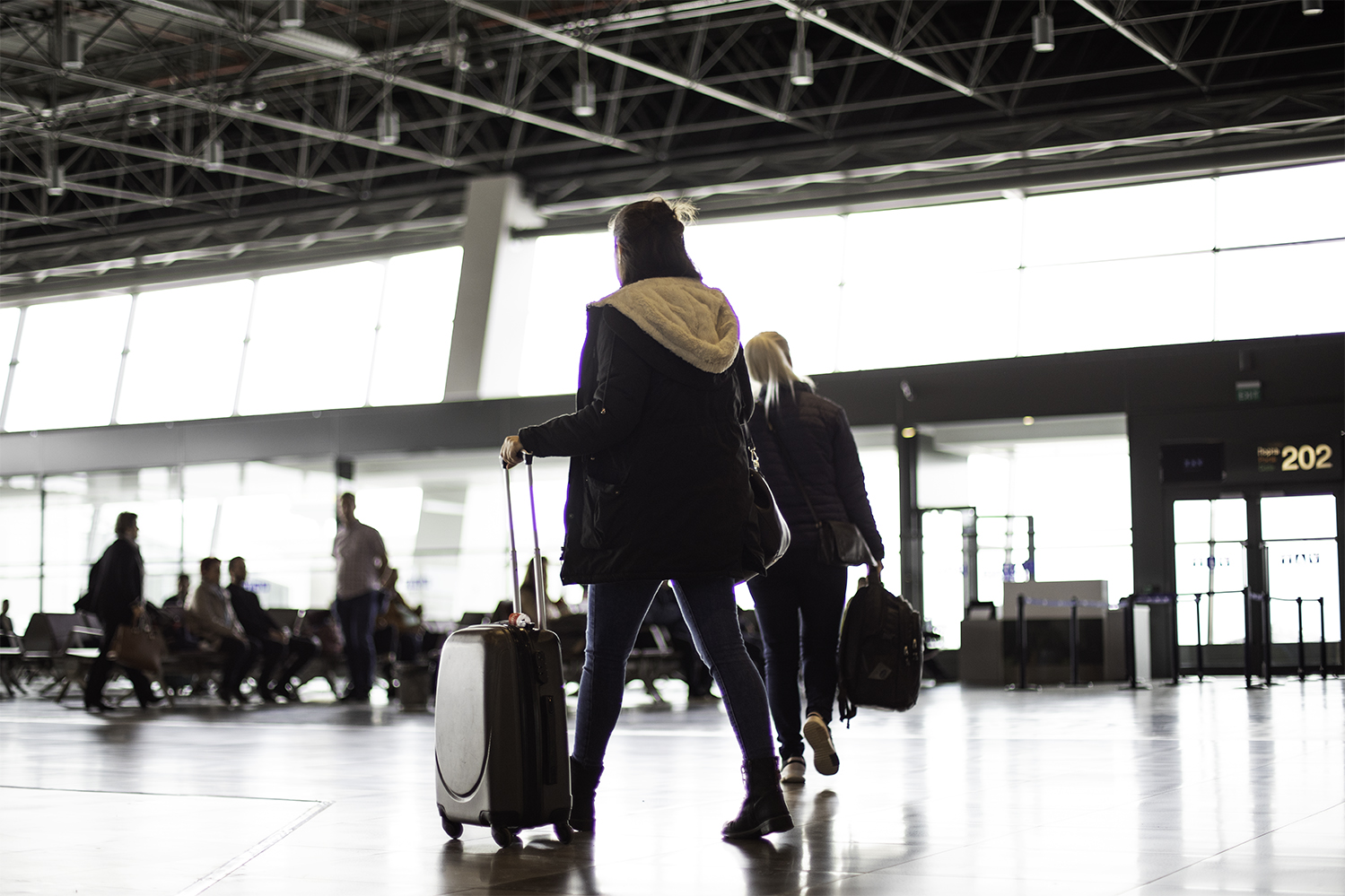 -The awards this year have been won by a diverse group of wining airports, which illustrates the industry wide commitment to delivering exceptional customer experience. Delivering a better customer experience is an important business strategy, in an increasingly competitive airport industry. ACI Global ASQ Program is the only one that not only recognizes excellence but also provides airports with objective measurement and benchmarking to help drive their performance, stated ACI World Director General, Angela Gittens.

Skopje International Airport is awarded by ACI with ASQ Award for 2018, in the panel of 18 airports in the region Europe, in the category from 2 to 5 million passengers.

The winning airports of ASQ Award for 2019 will receive the plaques by ACI at the ASQ Awards Ceremony, which will be held during the ACI Customer Experience Global Summit, taking place in Krakov, Poland, in September.

After finishing 2019 with 2,7 million passengers at both Macedonian airports – Skopje International Airport and Ohrid St. Paul the Apostle Airport, with a 14% increase on the annual level, TAV Macedonia continues to mark passenger’s number increase in 2020 as well. It finished January with almost 184 thousand passengers and 15% annual increase, at both airports. 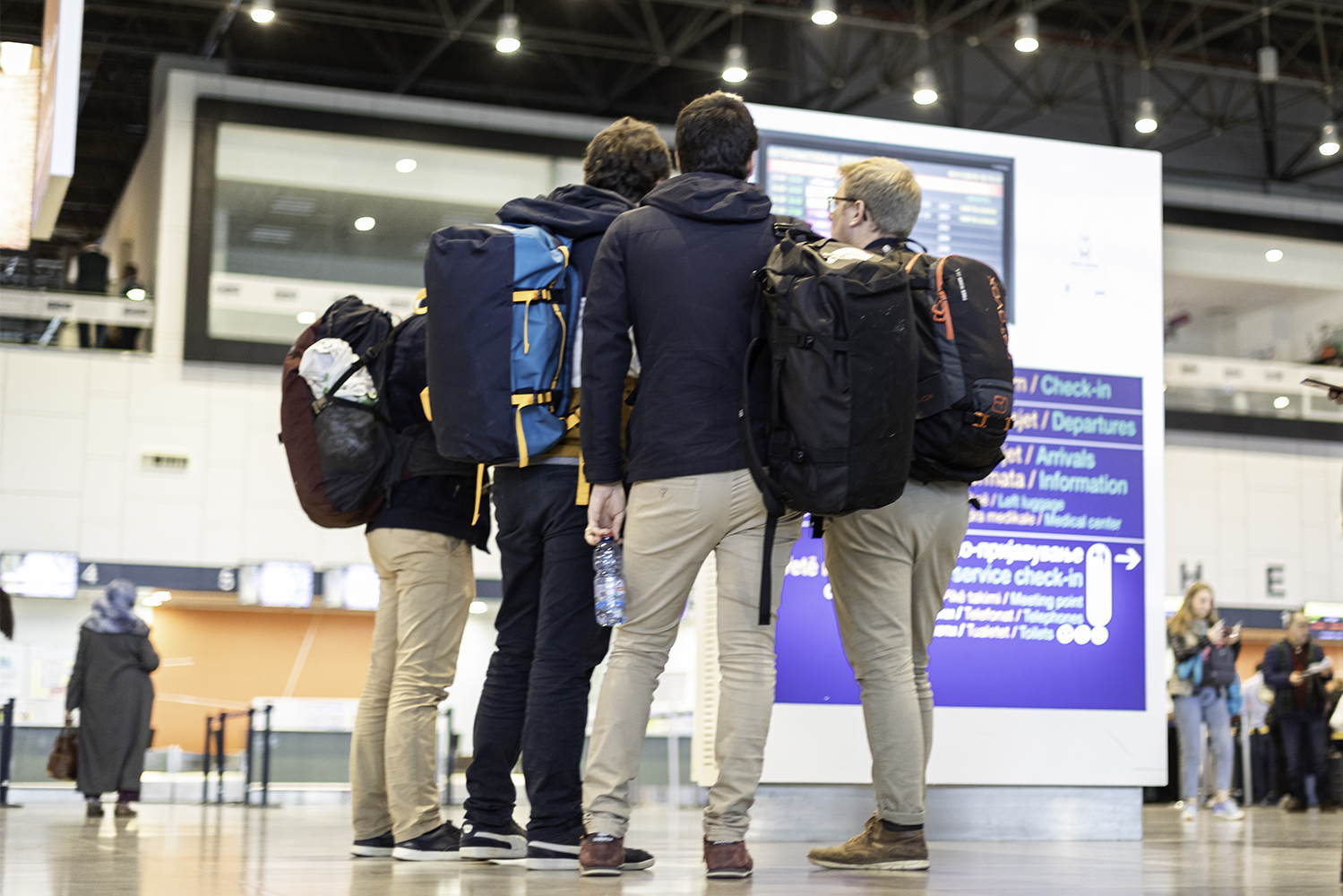 Aviation is a highly regulated industry due to the global character of the business. In Turkey, the precautions to be taken at airports against COVID-19 are defined in the “Airports Pandemic Precautions and Certification Circular”, issued by the Directorate General of Civil Aviation (SHGM). We have implemented these precautions fully at our airport.

As TAV Airports, our global footprint reaches 100 airports in 30 countries. Through this know-how, we have implemented precautions that go beyond legal requirements. Our staff is trained regarding the new regulations and code of conduct.

The precautions taken at our airport can be grouped under three main areas.

Firstly, we have mapped the movement of passengers and staff inside the airport and configured a flow that would enable everyone to keep safe physical distance with other in every step of the way. Secondly, we have increased the frequency of disinfection and hygiene works. Thirdly, we have made arrangements to minimize contact between passengers and airport staff.

To protect yourself and others, you are required to wear a mask at all times during your journey in the airport. Passengers without a mask will not be allowed inside the terminal and will not be able to board the plane. Irregularity to comply with this rule may result in penalties.

We kindly remind you to wear a mask during your trip to and from the airport with public transportation.

No, you can still check-in to your flight when you arrive at the terminal. On the other hand, for a faster and safer experience, we recommend to complete your online check-in before arriving at the terminal, whenever possible.

We have implemented signage for you to keep your physical distance with others during security control. Please adhere to directions.

Until further notice, only passengers and airport staff will be allowed inside the terminal. Please wait in the carpark to welcome guests.

We recommend that you arrive at the airport at least 2 hours before your flight for domestic flights, and 3 hours for international flights.

The lounges at our airport are configured as for you to keep your safe physical distance with others. Please follow instructions and signage.

During this phase, some facilities at our airport may be closed to service. For detailed information: www.primeclass.com.tr

The F&B points at our airport are configured as for you to keep your safe physical distance with others. Please follow instructions and signage. Wearing a mask is obligatory at F&B points.

The duty-free at our airport are configured as for you to keep your safe physical distance with others. Please follow instructions and signage. Wearing a mask is obligatory at duty-free shops.

The prayer areas at our airport are configured as for you to keep your safe physical distance with others. Please follow instructions and signage.

All waiting areas at our airport are configured as for you to keep your safe physical distance with others. Please follow instructions and signage.

Boarding will begin from the back of the aircraft and proceed to front row seats. Please wait for your turn.

Boarding pass and ID checks are configured to minimize contact with others.

Passengers without masks won’t be allowed to board the airplane.

All arrival areas at our airport are configured as for you to keep your safe physical distance with others. Please follow instructions and signage.