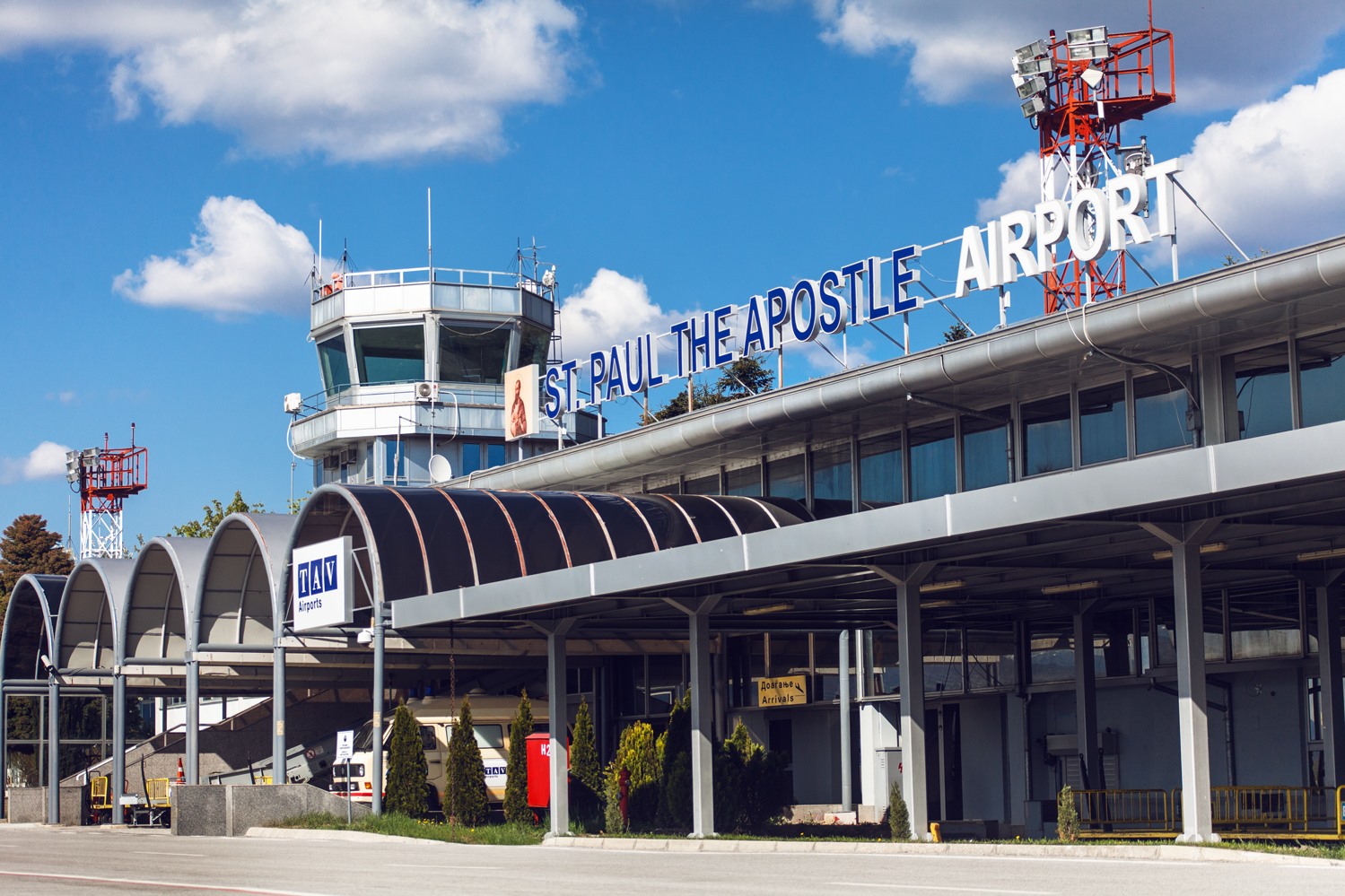 Ohrid St. Paul the Apostle Airport, managed by TAV Macedonia, reached an important new milestone - 300.000 passengers for the first time, which is an increase in passenger traffic of 815%, or 8 times in 10 years.

-In 2009, before TAV took over the operations, Ohrid Airport had 36.652 passengers. Over the past weekend, we have surpassed 300.000 passengers, which is an increase of remarkable 815%, or in 10 years we have managed to achieve 8 times bigger passenger’ traffic. This is a result of the route network expansion at Ohrid St. Paul the Apostle Airport, on which as an airport operator, we are constantly working. Following the intensive air traffic increase, in 2020 TAV Macedonia will undertake construction works for extension of Ohrid Airport terminal building. It will result with doubling the capacity of Ohrid Airport, that will be able to serve up to 600.000 passengers, by 5.000 to 6.000 flights annually, announces Alper Ersoy, TAV Macedonia General Manager.

Ohrid Airport currently serves 22 destinations, from which 8 are regular, year round, all operated by 13 airlines.

-From an airport that served just couple of destinations during the summer season in 2009, today Ohrid Airport is serving a total of 22 destinations. Eight are regular, year round routes, to: Zurich, Basel, London, Memmingen, Milan, Vienna, Dortmund, Malmo, and 14 are seasonal flights to: Adana, Amsterdam, Bergamo, Brussels, Dusseldorf, Eindhoven, Friedrichshafen, Istanbul, Katowice, Maastricht, Stuttgart, Tallinn, Tel Aviv, Warsaw, operational from April until October. We are working to transform Ohrid Airport into a regional center, serving not just the Macedonian passengers, but also all the passengers from the neighboring countries. These efforts are done hand to hand with the Government, the Ministry of Transport and Communications, the airlines, the municipalities, as well as the relevant touristic bodies, explains Ersoy.

The number of passengers at Ohrid St. Paul the Apostle Airport in the first 11 months of 2019 grew by significant  70% to 296.870 passengers, that were carried by 2.469 flights (66,7% annual growth). While only in November, Ohrid Airport had a significant increase of 240% in passengers’ traffic, which is a remarkable result achieved off the summer season.

With its 53,8% increase in passenger traffic in the third quarter of 2019, Ohrid Airport, is listed as one of the fastest growing airports in its size, in the group of non-EU airports, by the latest Airports Council International Europe’ air traffic report. 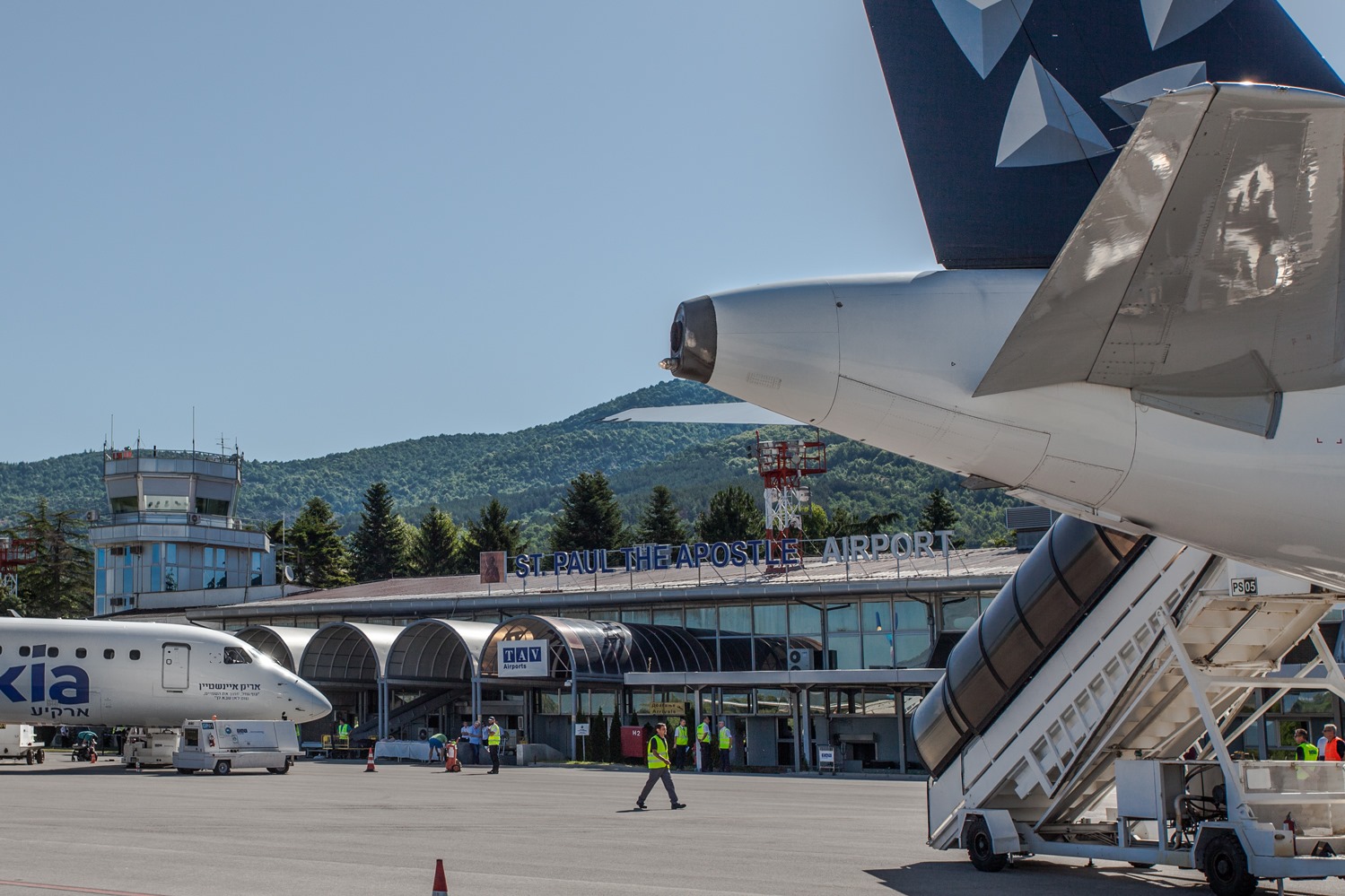 Both Macedonian airports, Skopje International Airport and Ohrid St. Paul the Apostle Airport, reached 2,5 million (2.480.767) passengers from January until November 2019, which is an annual increase of 14%. The total number of flights in the same period is 20.215 flights, with 10% growth. 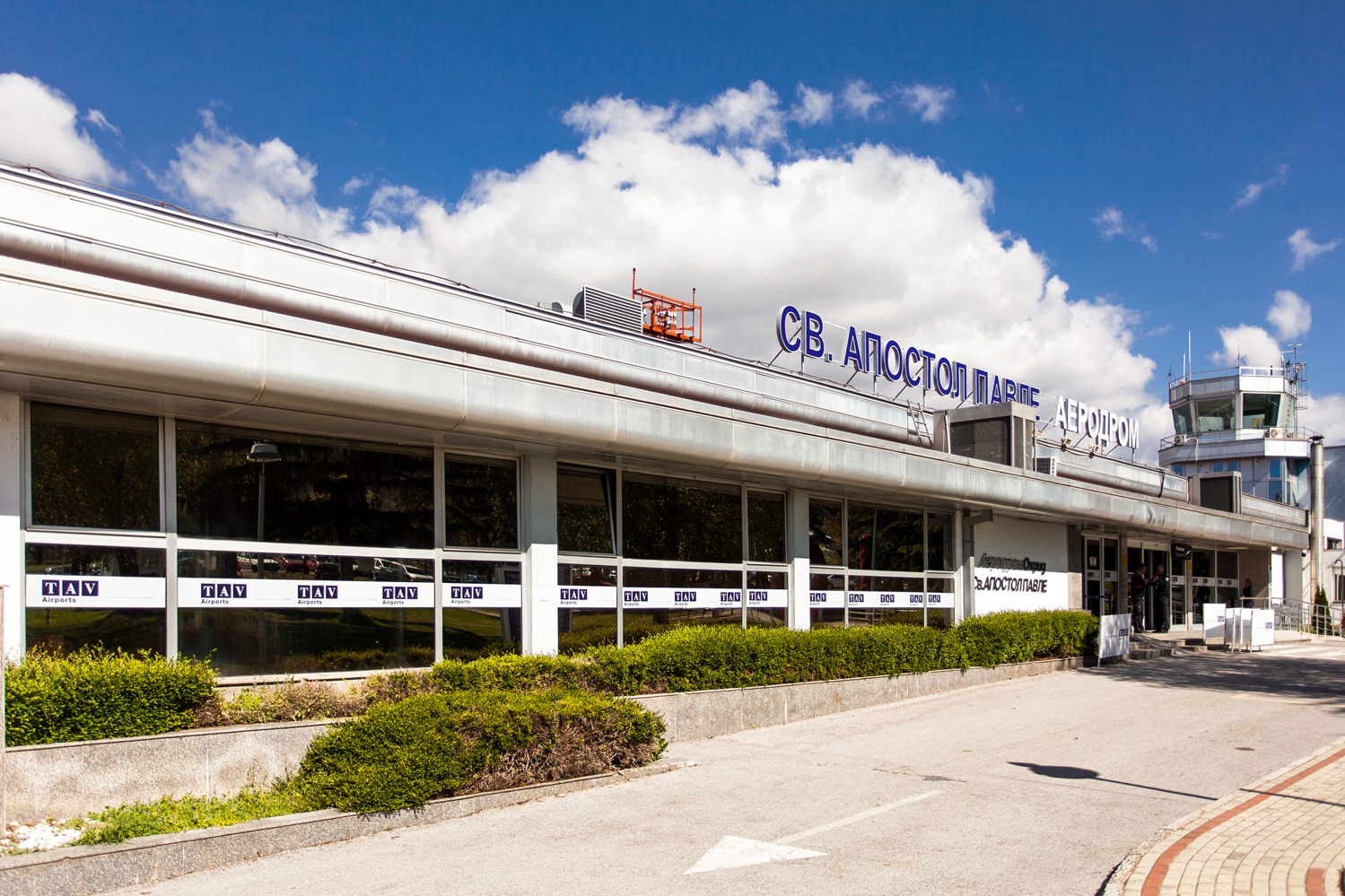 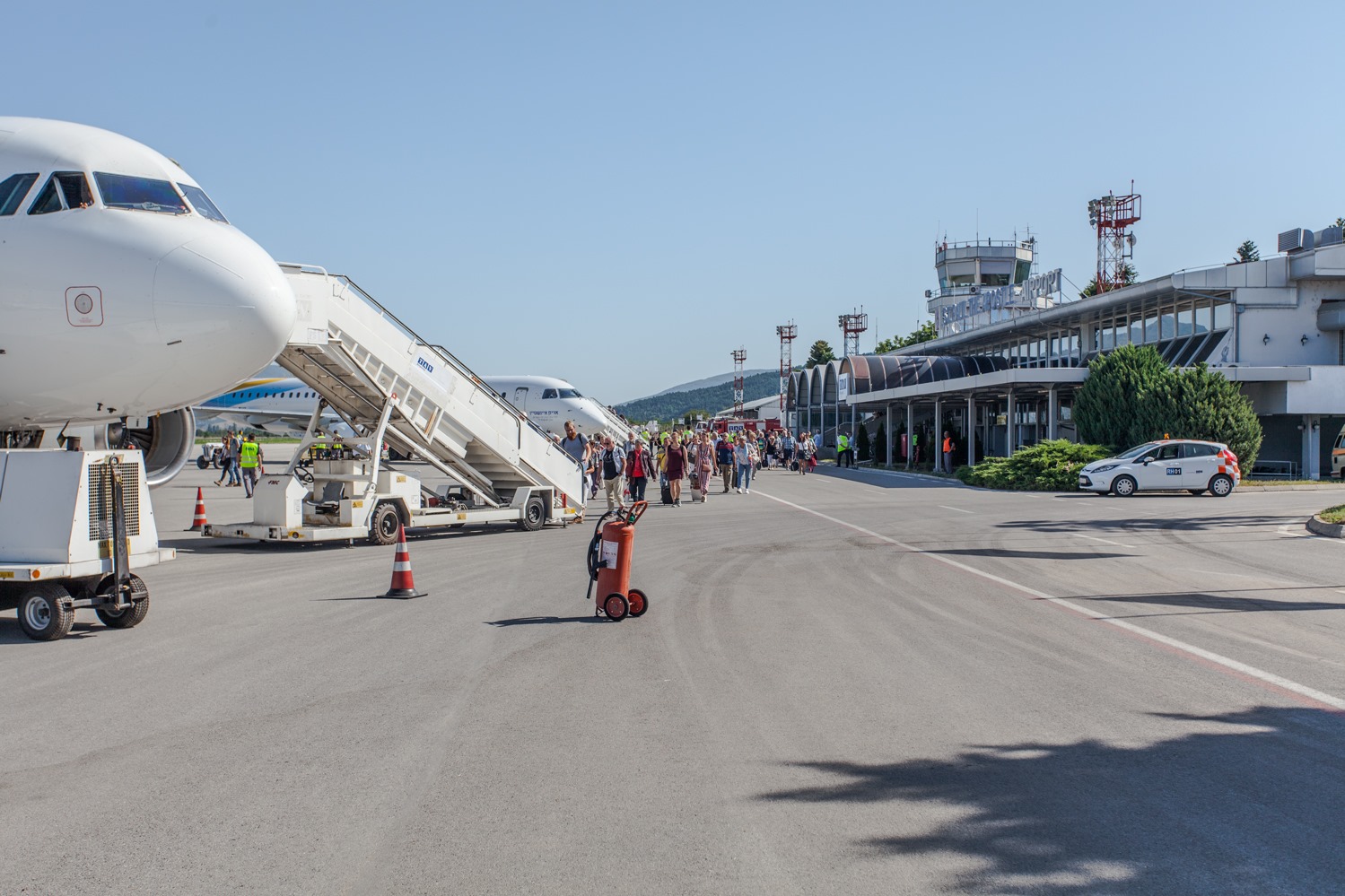 -    TAV Macedonia, as an airport operator, acts in accordance with the state institutions in the countries where passengers travel, the airports border authorities and the rules and regulations of the airlines. For information on current air travel restrictions and the required documents for entrance in the intended country, please contact the related embassy and the airline that you will be travelling with.

- Despite the existence of the online registration option, due to the new Covid-19 restrictions, passengers are obliged, upon their arrival at the airport, to register at the check-in counters, to check and verify the documents required to enter the country in which they travel, as well as to check-in their luggage.

-    Passengers will need to follow the instructions of security agents in a disciplined manner, and there, as in all procedures where queues are expected, it will be necessary to keep a physical distance of at least 1.5 meter.

As of 19.8.2021, 21:00h entrance into the airport terminal building will be allowed only by presenting one of the following:


-    Certificate / confirmation for immunization (vaccination) of the SARSCoV-2 virus, i.e., application of at least the first dose of vaccine against the infectious disease COVID-19; or
-    Certificate / confirmation for having recovered from COVID19 in the last 45 days, counting from the day of recovery; or
-    Medical certificate with negative result from RT PCR SARSCoV-2 test, 72 hours, or rapid antigen test, 48 hours.

*This does not apply to persons under the age of 18.

Please use Departures C door to enter, and Arrivals B door to exit the airport terminal building.

-    We highly recommend to our passengers to arrive at the airport at least 3 to 4 hours before their flight. Due to new measures for protection from COVID-19, some of the airport procedures may take longer time.

Business and VIP lounge areas are cleaned and disinfected as prescribed by public health authorities with increased frequency based on the air traffic.

All served products in the lounges will be displayed prepacked in foil therefore all guests will be able to get products as individual packs.

Self-service options where passengers have limited contact with staff.

- Separate waste bins are placed for disposal of mask and gloves.

- Tables and chairs are disinfected after being used by our guests.

- All the employees in the outlets shall wear protective equipment. Plexiglas separator has been fixed in order to avoid the contact between cashier and guests.

- At the entrance of the outlets and in the common areas, hand sanitizer units are placed.

- Through guiding signs, guests will be reminded of the physical distancing rules and rules to follow, especially for the lines at order and payment points.

- In all restaurants, the capacity has been reduced and the distance between tables has been increased. Four chairs will be put across to all tables.

- Тrays and plates will be removed from common areas, they’ll be given to guests by the service staff.

- Disposable packed products (salt, sugar, napkins, straws, stirrers) will be handed to our guests by the service staff, while the same products in disposable packages are removed from the common areas.

- For the lines at order and payment points, stickers have been posted on the floor at a distance (1.5m) suitable for social distance.

- All the used equipment in the duty free that comes in contact with the customers, shall be disinfected frequently.

- Guiding signs for the prescribed physical distancing (1.5m) in the shop area for all present persons are placed.

- We encourage customers to use only contactless credit or debit card.

- Strict entrance points in shops will be placed, with an alcohol-based disinfectant liquid machine to be used prior entering the shop.

- Passengers who are not wearing a mask will not be admitted into the store.

- Not more than 10 customers will be allowed at the same time in the shops.

-    Passengers should arrive at the airport at least 3 to 4 hours before their flight, as check-in counters close at least 1 hour before departure time. This means that passengers must have completed the check-in procedures at least 1 hour before take-off, and then the Passport Control and Security Checking procedures, in order to arrive on time in the boarding area, i.e., at the Gates. It is mandatory for passengers to wear a protective mask, maintain the prescribed physical distance indoors and maintain a high level of personal hygiene.

This decision is not applicable for passengers younger than 18.

-    You can make COVID-19 tests prior your departure at both airports through laboratories Zan Mitrev and Nikob Lab. More information available on the links below:

-    We regularly and timely apply all measures of the Government and the Ministry of Health, as competent state institutions. Of course, we also follow the experiences of other airports around the world and the recommendations of the World Health Organization (WHO), the European Union Aviation Safety Agency (EASA), the International Civil Aviation Organization (ICAO), the International Airports Council (ACI) and the International the Air Transport Association (IATA), all in order to take appropriate action in a timely manner as conditions change in this global pandemic.